Gu means nine. I seldom watch drama because I don’t like the feel of following a movie. I prefer it just end in 1 or 2 story. Not to mention Korean drama. I feel it is just boring and lots of crying. Somehow, there was one day when I was sitting in front of the TV eating dinner, and my dad switch to this channel airing a Korean drama. It is a Chinese (Mandarin) dub. The drama eventually attract me to watch until the end of the episode 1. It is a romantic comedy drama. Ignoring that, I didn’t bother to follow the drama. Few days later, when I was in front of the TV having my dinner, this drama airing at the same channel. Even I’m not following it, still my eye watching it till the end. This time, the feeling of want to watch further. Therefore, I follow the drama everyday and until one day, I miss one episode. I decide to download this drama and watch since I didn’t get to watch the first few episode. 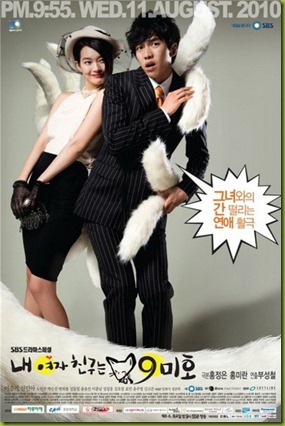 The story about a guy name Dae-Woong accidentally releases a gumiho (nine tail fox) in some ancient painting. The story starts with comedy and love happens between both of them. Lee Seung Gi as Cha Dae-Woong and Shin Min Ah as Gumiho. In this drama, there was one pretty boy which actually looks gay starring No Min Woo as Park Dong Ju. He’s a trying so hard to separate both of them.

Beginning of the drama, it was so funny but when near to ending, sad things keep happening. I watch till tears about to drop. The drama is very nice. There are few OST which is very nice. Fox Rain (main theme), I Love You From Now On, and more.

This drama just nice. Love it. ♥